Petting dogs is so commonplace that many dog-lovers may have never questioned where this habit came from—or whether dogs even like being pet. But while many other animals—including humans—don’t like to be touched by other individuals or species, dogs are unique in their desire for physical contact and displays of affection.

But that physical contact does come with some important rules to follow—especially when interacting with new or unfamiliar dogs. Read on for answers to common questions about petting dogs, as well as tips on how to pet a dog properly. 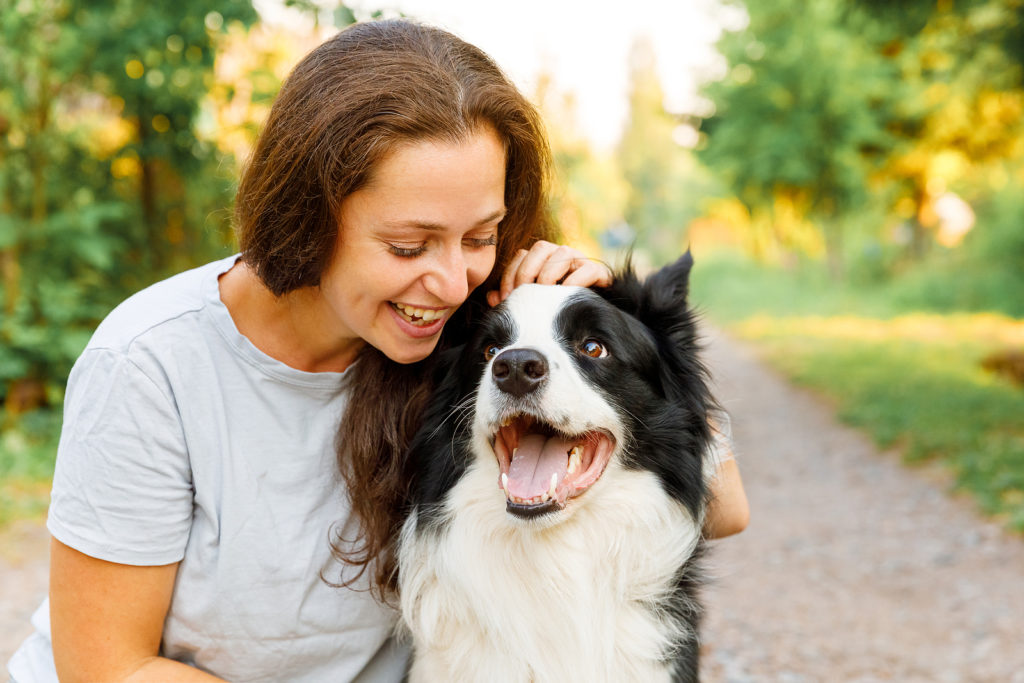 Dogs are social creatures, and they’re particularly bonded with their human companions. Many dogs experience petting as a form of affection from humans, which makes these interactions not only pleasant, but even supportive of your dog’s mental health. In fact, research shows that dog brains release the love hormone Oxytocin when they’re petted and given attention from a human.

For what it’s worth, the reverse is also true: Petting a dog can release Oxytocin in humans.

While every dog is different, and some dogs may not want to be petted in certain situations, or by certain people, dogs generally enjoy being scratched on their chest, neck, and shoulders. Dogs may also enjoy scratches around their ears or along their back, and if a dog rolls onto its back to show its belly, it might be asking you to scratch its stomach.

If you’re unfamiliar with a dog, it’s best to start scratching in the more generally preferred locations of the chest, neck, and shoulders. As you become comfortable and familiar with a dog, you can expand your scratching to other parts of their body, especially if they show preferences for a certain location.

A dog’s ears are rich with nerve-endings, which makes the ears an easy location to scratch or rub and trigger the release of Oxytocin and other pleasing hormones. However, because a dog’s ears are so dense with nerves, they can be sensitive to being touched in this location and may be nervous that someone might hurt them.

For this reason, always approach ear-rubbing carefully, moving slowly and paying attention to the dog’s behavioral cues. If the dog seems nervous, it’s best to back off.

Why Do Dogs Shake Their Leg When You Scratch Them?

Dog-lovers can’t help but enjoy the sight of a dog shaking or kicking their leg while being scratched. But if you’ve ever wondered why dogs do this, the answer is simple: The shaking leg is an involuntary reaction, just like when your leg or arm jumps when getting hit in the knee or elbow.

When you scratch in the right spot, you hit a nerve that then sends a message to the dog’s leg to kick. And while we may all love to watch that leg kick, the reflex can startle a dog that doesn’t understand why it can’t control its body.

Unless you’re familiar with a dog and know they’re comfortable with you touching the top of their head, it’s better to pet other parts of their body where they’ll feel more at ease.

While some dogs may not appear unhappy to be pet while they’re sleeping, dogs are just like humans when it comes to having their sleep interrupted. In other words, they typically don’t like it. And, if you catch some dogs off-guard, they may be scared and become aggressive in response to what they might perceive as a threat.

Again, you may be able to pet a sleeping dog—and even offer it comfort—if you’re familiar with that dog. In most cases, though, let sleeping dogs lie—and avoid situations where you sneak up on them.

Where to Pet a Dog to Calm Them

If your dog is anxious, stressed, or upset for any other reason, petting may be an effective strategy to calm them down and alleviate the intensity of whatever they’re feeling. Take a conservative approach to petting any upset dog and stick to the zones of the dog’s body where they are most receptive to being pet. For most dogs, this includes the chest, shoulders, and neck.

Be aware that petting a dog may not be enough to completely calm them, depending on how upset they are. While petting might be a great preliminary soothing option, you should also seek to remove the source of your dog’s stress, if possible. This may mean moving to a different location, turning on white noise, or finding other ways to create separation and distraction.

When you pay attention to the dog’s behavior and take a careful approach to interacting with new or unfamiliar dogs, petting can be a great way to forge and deepen a connection with man’s best friend. Respect each dog’s boundaries and both you and the dog will be better off for it.