One moment a dog is sniffing on a hiking trail and the next there’s yelping, bleeding, and shaking! What should a pet owner do, and how can one avoid interactions with Florida’s poisonous snakes? A snake bite on a dog or cat can be a terrifying thing to experience as a pet parent, so here’s what to watch out for as well as some tips on what to do to avoid these tense situations.

Types of Poisonous Snakes in Florida For Pets

There are six common Florida snakes that are quite venomous for both dogs and humans: coral snakes, copperheads, cottonmouths, pigmy rattlers, Eastern diamondback rattlesnakes and timber rattlesnakes. If any of these snakes have bitten your dog or cat, it’s important to connect with a veterinarian as quickly as possible. 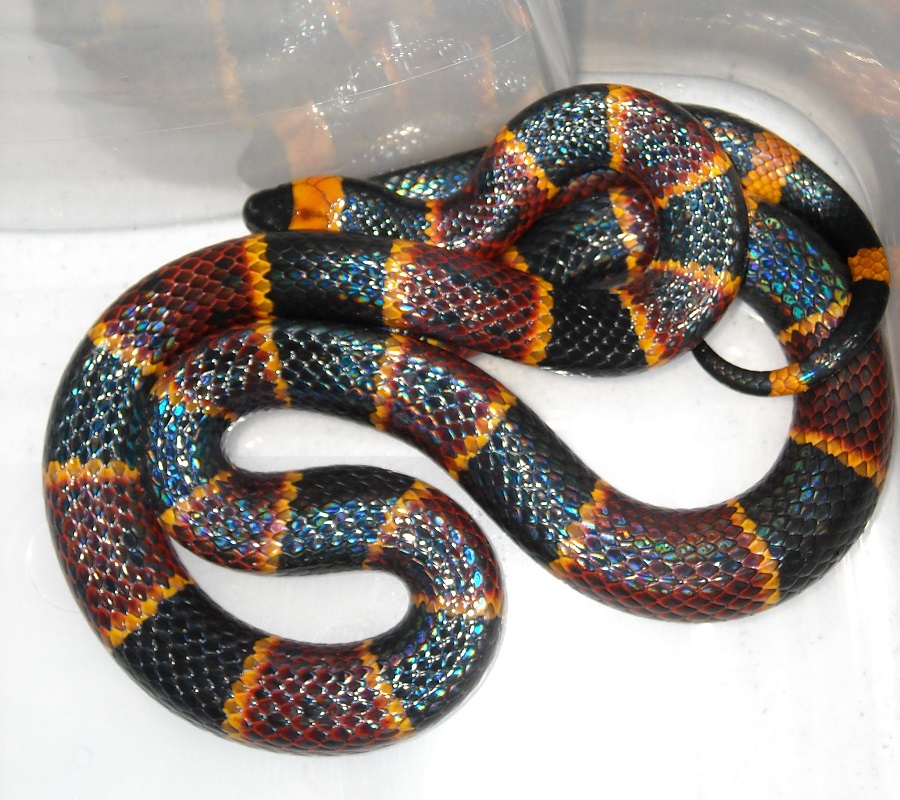 The old mnemonic “red on yellow kills a fellow” refers to the infamous coral snake. Florida, Louisiana and many of the coastal plains of the Carolinas are home to this snake, which loves to burrow, popping to the surface during rainy seasons. Their neurotoxic venom is one of the most potent in the United States, causing major respiratory failure in as little as 18 hours. They don’t spit venom; they hold down their bite to drip venom into the wound. The bite itself may not even cause swelling. But twitching, rapid breathing, salivation and strange movements may correspond with a coral snake bite on your dog. Antivenom, which is not always available given a shortage in 2012, should be administered within a few hours of a bite in order for it to be effective. 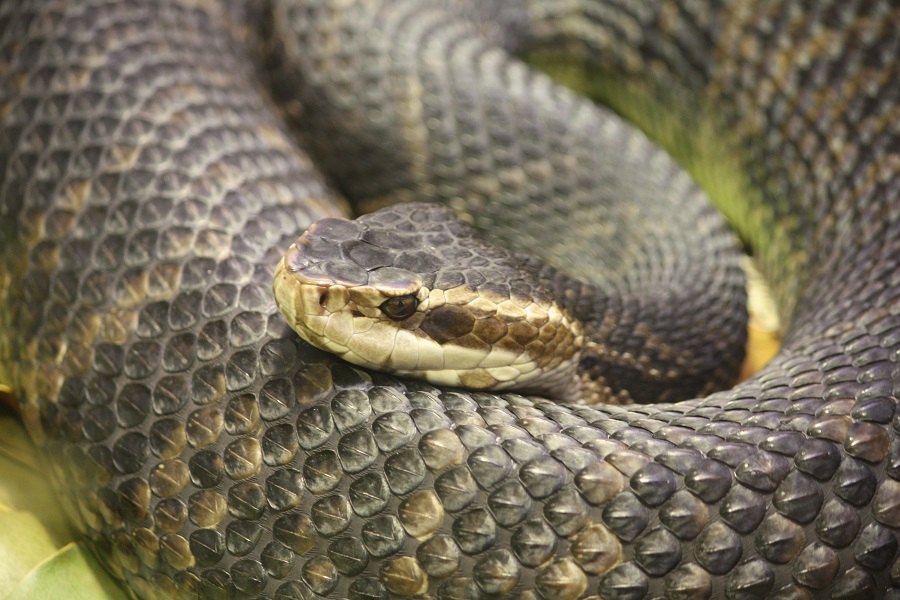 Cottonmouths (or “water moccasins”) are infamous for being fairly aggressive (somewhat unfairly), often standing their ground rather than slithering away. These semi-aquatic, typically brown snakes prefer swamps and lakes and are also one of the more common snakes that bite in south Florida. Effects on a dog can be horrible, as these snakes produce a cytotoxic venom, which can destroy the victim’s tissue and cause necrosis. The bite itself will normally swell and cause pain. Symptoms may begin to appear in as little as one hour, and quick action is necessary. 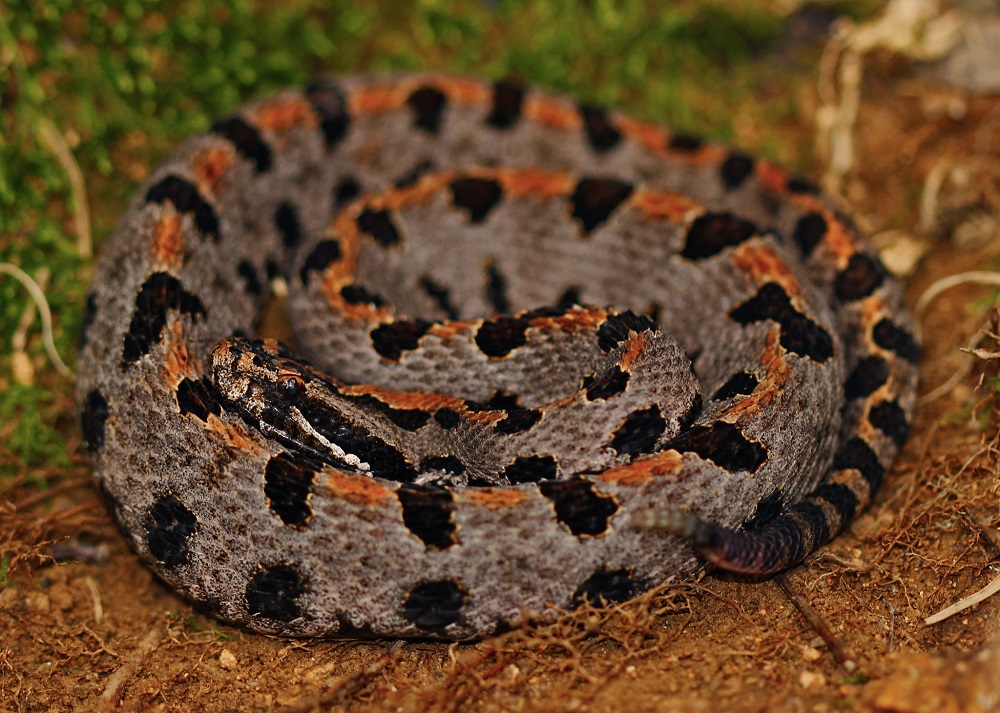 There are three different types of venomous rattlesnakes native to Florida: the Eastern diamondback rattlesnake, the timber rattlesnake and the pigmy rattler. It’s important to point out that none of them necessarily will make that iconic “rattle” sound before there’s a potentially deadly bite. The Eastern diamondback is a large snake known to jump as much as two-thirds its body length, and the timber rattlesnake is known for its camouflage. Also, the pygmy rattlesnake, Florida’s small rattler, can be a problem as well. Only about one foot in size, the pygmy rattler of Florida is blotched and grayish with a reddish-brown stripe down its back. This snake is different from most rattlesnakes, in that its iconic “rattle” is exceptionally quiet – hardly louder than an insect’s buzz. A lot of problems can happen due to a rattlesnake bite. Dog symptoms include panting, seizures, tremors, drooling and lethargy. A rapid drop in blood pressure or a cardiac arrest is possible, so it’s important to get to a clinic as quickly as possible. 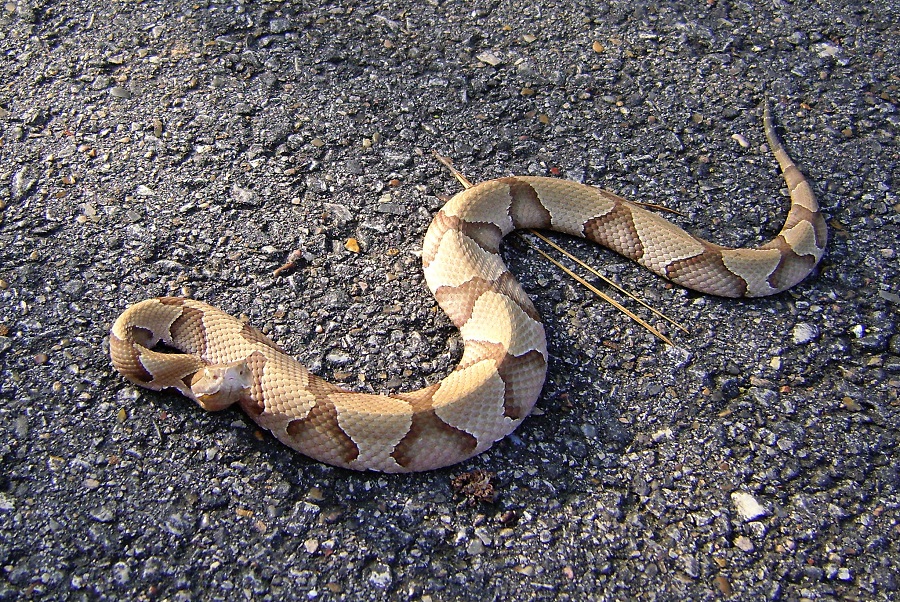 Copperheads are one of the weaker venomous snakes in Florida, but they still can be a big problem for pets. These light-brown snakes typically have an hourglass shape on their backs, and they prefer wet areas like swamps and stream beds. In Florida, copperheads prefer the panhandle. Their bites are extremely painful but less poisonous than rattlesnakes, though pets should get immediate medical care. There is a chance that these snakes will give a “dry bite” and not inject venom, but it’s better to be safe than sorry!

Other Types of Snakes

These are the poisonous snakes of Florida, but there are plenty of other worries a pet owner might have. For instance, can a Florida yellow rat snake hurt a small dog? Typically, not in a deadly way – a yellow rat snake will typically snap only if cornered and mimic a rattlesnake by wiggling its tail. If you’re hoping to safely identify a local snake, check out the Florida Museum’s Visual Guide to Florida Snakes.

Tips for Keeping Dogs Safe from Snakes in Florida

What To Do If Your Dog Is Bitten

If your pet has experienced a snake bite in Florida, please contact us as soon as possible at the nearest location to you!