No one wants to see dogs involved in fights, but the simple fact is that it does happen. It can happen either with dogs who live in the same home or during encounters with other dogs in public. Learning how to break up a dog fight can keep pets from harming each other as well as any other people who may attempt to intervene.

Dogs may fight for several reasons, most of which are simply part of the animal’s natural canine instincts. Pet owners should react quickly if they see a fight between dogs to help avoid serious injuries that may require a visit to an emergency veterinarian. 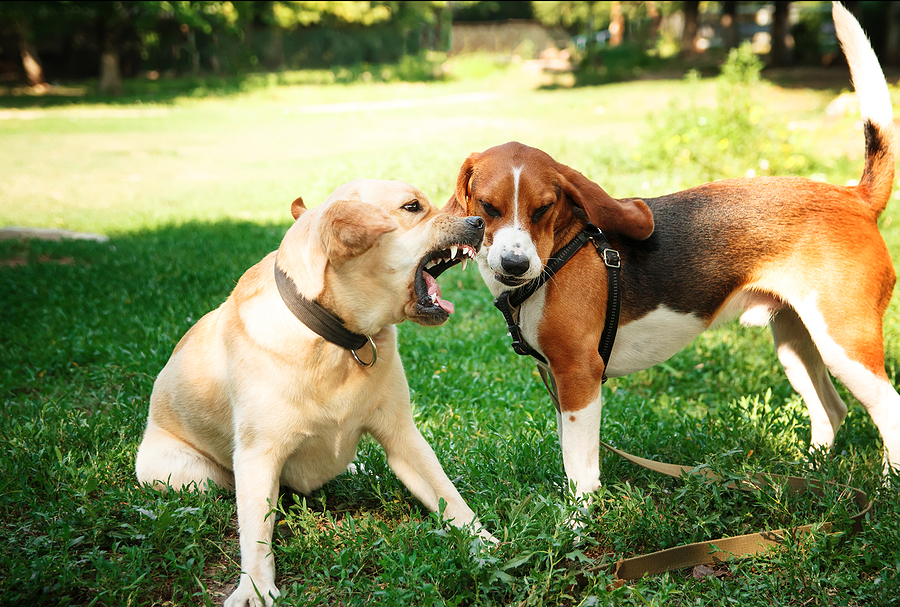 Seeing dogs fight can be incredibly upsetting, but it is important to learn safe ways to break up a dog fight so that no animal or human gets hurt during the incident.

Why do dogs fight?

Most dog fights have some sort of territorial reason to engage in aggressive behavior. Either a strange dog has entered the comfort zone of your dog, or one dog feels its food, family member or possession is threatened by another dog. Overstimulation between dogs who initially start out playing can lead to a fight. Or, quite simply, dogs fight because one does not like the other thanks to their smell or size.

What preventive steps should I take to prevent a fight?

If nature plays a big role in aggression, you may wonder how to stop dogs from fighting in the first place. There are several steps you can take that will create an environment that doesn’t lead to unnecessary anger.

Some of these rules also apply in figuring out how to stop dogs from fighting in the same household. It’s understandable to think, “My dog attacked my other dog for no reason,” but there are issues, even with pets you may consider friends, that could lead to a fight. Steps you can take to avoid in-house fighting include feeding dogs separately, keeping special toys out of reach from both dogs and choosing the opposite sex of your current pet when adding a new dog to the family.

How to Stop Dogs Fighting Each Other

Once the initial shock of seeing dogs attack each other passes, it’s important to remain calm and act quickly to end the disturbance. Your first step should be to try and stop the fight without resorting to physical methods.

Here are some strategies to stop a less-intense dog fight:

What to Do in a Dog attack

Some dog fights are more intense than others. You may be wondering how to tell if a dog fight is serious; the dogs will exhibit several signs that playtime is over, including stiff bodies, raised hackles, flat ears and low growls.

Here’s what to do in an intense dog fight that needs to be physically broken up:

In the aftermath of a dog fight, calm your pet down and then check injuries and tender spots. Take them to a place they enjoy and pamper them for a bit until they relax. If your dog has serious injuries, take them immediately to the emergency pet hospital. But knowing the signs and strategies for stopping dog fights can keep your four-legged friends safe from harm.